About William C. Spaulding and WilliamSpaulding.com

My name is William C. Spaulding. I am the author of all the articles on https://williamspaulding.com. Since this is a new site, there are only a few articles right now. I also write all the articles on thismatter.com, which has more than 850 tutorials on personal finance, investments, and economics.

At the bottom of every page, including this one, I provide an e-mail link so that if you want to respond to any page or to comment on it, you can do so by e-mailing me. As I have said, I always appreciate constructive feedback.

I am also not on any of the social networks, except Google+, because I do not have the time for general chitchat. Since I already do a lot of writing for my websites, it is much more tiring to also write extensively on social networks. The only reason why I am on Google+ is to establish my authorship link, since I do have to worry about my ranking authority to generate traffic. However, I do not update my Google+ profile that much. I do believe that the authorship attribute is a great idea, since it presents a great impetus to write the best articles, but I would rather do all my writing on my own site, where I have complete control and where I can benefit the most from my writing.

I hope you enjoy my site. If you have any constructive comments or suggestions, please email them to me.

At the end of 2017, the Republicans passed a very nice tax policy for the wealthy. But what if they had passed a tax policy for the non-wealthy? In 2018, the top 20%, which starts at $157,900, received $10.5 trillion of income, but the federal government received a total of $1.7 trillion as personal income tax. Even if the top 20% paid all the personal income tax, their effective tax rate would only be about 16%. And if they did pay all the personal income tax, that means that anyone earning less than $157,900 would not have to pay any personal income tax at all! Would not that tax policy help the poor and the middle class much more and reduce government handouts? And since poorer people have a higher marginal propensity to consume, would not tax breaks to these people stimulate the economy more than giving the tax breaks to the wealthy? My new book, Trickle-Up Economics, shows how most people could pay much less tax without an undue burden on the wealthy. My proposal is based on simple economic principles that anyone can understand. It will be easy to see why this tax policy is the best, both for the economy and for the people, and it will also expose the lies, fallacies, and faulty reasoning used by politicians to justify an unfair tax system. 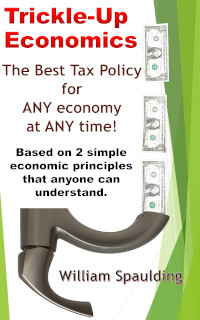